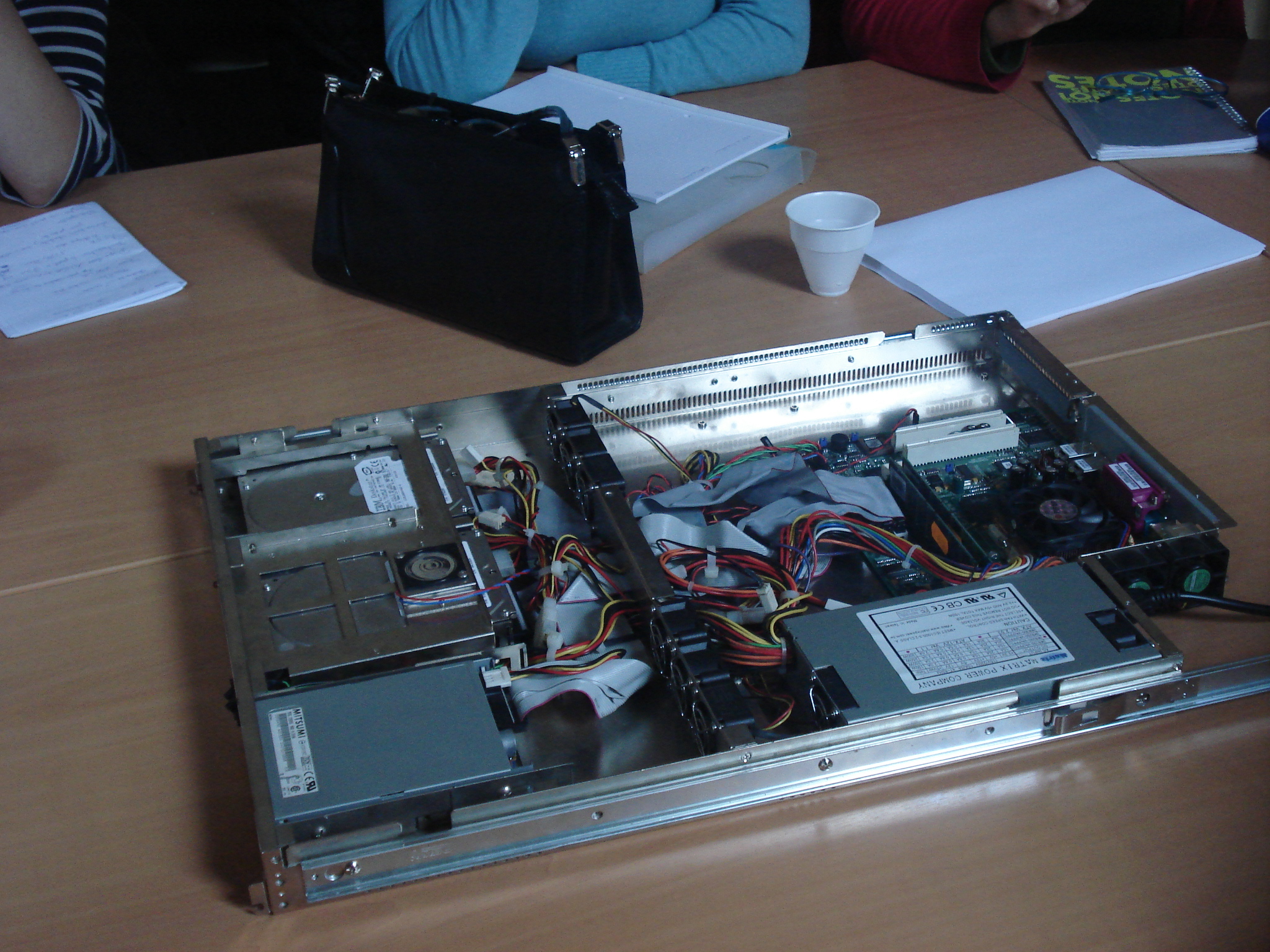 At the Feminist Server Summit [1], Juliane told the story of Amaya [2], a server collectively run by a group of women aligned with Free Software. “Last year it stopped” she explained. “Finally we didn’t host any other organisations, we were in auto-training mode. We were working so much on administration, security updates...there was too much maintenance and not enough content.”

Did she mean to say that we were too much focused on practicalities? Or was she pointing at the tension between thinking and doing that might have been the reason to put the project on hold?

I discovered the desire for a Feminist Server at the second edition of Digitales [3]. At these 'digital meeting days' Laurence brought together women working with networked technologies (system-administrators, cyberfeminists, net-artists, students, developers) and I was one of those. “It was putting people, words, machines together in the same room, and the people being in this place could have a sensation or could understand something, and go away with this understanding.”

When Digitales transmuted into Les Academies du Samedi [4] we converged around a shared interest in making the Feminist Server a reality while figuring out what a server could and should be. We branched our second-hand machine to the network and started learning about command line, domain name servers and Apache configuration files and organised performative sessions deconstructing the patriarchal vocabulary of 'client' and 'server'.

We feminised the French word for Saturday and became Samedies: Femmes et logiciels libres, a losely knit self-learning group that attracted women with diverse interests and skills. “It is a political liaison which is about re-appropriating tools, and an attempt to imagine a political universe where we are ourselves implicated in the things we do and make, and where we collectively can discuss this future.” [5]

Our commitment to Free Software had and has much to do with how it establishes conditions for  action and reflection. When all users have the right to run, study, modify, and distribute source code for any purpose, this creates an environment where speculative design can flourish. But its  technocratic focus combined with a boundless trust in meritocracy makes that imaginative practices are more often than not met with suspicion. A woman caught speculating in this context, obviously runs the risk of re-enforcing the cliché that instead of producing valid code, all she does is dream about it. The Feminist Server operates on this tension.

In 2012, we put the project on hold. Once we had cleared out the initially interesting confusions between those who joined to administrate a server that could host webservices for sister projects, and those that were mainly interested in Amaya as a figure of political speculation, it was time to move on.

A year later, Constant organised The Feminist Server Summit to see if we could reboot the desire. We asked several alternative server projects to present their histories and plans, summoning in fact many Feminist Servers. A discussion with Ushi and Reni sparked A Feminist Server…a retro-manifesto written more than ten years after the idea had surfaced. This text was used by Alex, Reni and Marthe for the re-launch of Anarcha-server, managed according to an ever-evolving set of feminist principles, and currently hosting working tools for initiatives related to Transhackfeminism! It made an appearance as “supporting actant” after Reni hosted a discussion of The Feminist Server while contributing to the re-launch of Systerserver that came out of the Eclectic Tech Carnival network.
The circular and ever-extending histories of The Feminist Servers link together a heterogeneous group of people who at different times and places decided to care for it's technical reality but also for how it could grow as an idea. If there is such a thing as a politics of speculative design, than it would be that it invites us to 'act where there are no charters', creating a continuous movement between imagination and concrete, situated action, in order to extend the parameters of change.

[1] The summit was organised by Constant as part of the four day event Are You Being Served? (Brussels, December 2013). Only some of the invited server projects defined themselves explicitly as feminist and preferred 'autonomous', 'alternative' or 'collectively run'. Participants included  Marthe Van Dessel, Peter Westenberg, Reni Hofmueller, Juliane De Moerloze, Femke Snelting.

[2] The server is named after Amaya Rodrigo, a feminist developer who started out contributing as a translator to the Debian operating system and is now a software maintainer for the same project.

[3]  'Digitales' refers to digital technologies, but also to fingers, organism and poison. The event was initiated by Laurence Rassel who worked at the time for ADA, a Belgium network for women and new technologies and with Constant, association for arts and media. Digitales took place in Brussels and Antwerp in 2001, 2002, 2004 and 2006. The media archive contains recordings of activities and interviews with participants.

[4] Les Academies du Samedi (The Saturday Academies) launched in 2006 and took place every five weeks in Interface3 and other relevant places until 2012.

[5] Interview with Juliane de Moerloze, We will get to know the machine and we will understand. In: Conversations. Constant (Brussels, 2015)