The development of machinery along this path occurs only when large industry has already reached a higher stage, and all the sciences have been pressed into the service of capital; and when, secondly, the available machinery itself already provides great capabilities. Invention becomes a business, and the application of science to direct production itself becomes a prospect which determines and solicits it.                 - Karl Marx

An economic collapse or reformation always asserts a new economic center at the end, a new way to measure and create value, as labor power reformed must continue to produce. Post-modern capitalism, as Hardt and Negri tell us, drives an “informational accumulation [that] destroys or at least destructures the previously existing productive processes, but (differently than Marx’s primitive accumulation) it immediately integrates those productive processes in its own networks and generates across the different realms of production the highest levels of productivity.” Primitive accumulation is not simply a historical phenomenon but an engine that fuels the production of history, time and time again.

This is Hardt and Negri's "Informatization of Production":

"The relations of capitalist exploitation are expanding everywhere, not limited to the factory but tending to occupy the entire social terrain [while also completely investing the relations of production with social relations] making impossible any externality between social production and economic production.”

Labor power and its qualities cannot be grasped, nor exploitation measured and localized, with any guaranteed degree of certainty. Sociality and productivity are enmeshed. Abstraction itself is a vital tool. Hardt and Negri tell us again: objectification and exploitation tend to target not particular productive operations but the universally social productive capacity - that is, “the universal capacity to produce...abstract social activity.” Hence, abstract labor as an “activity without a place;” as cooperating “sets of brains and hands, minds and bodies;” as “the intellectual energy and linguistic and communication construction of the multitude of intellectual and affective laborers,” all subject to exploitation.

Regardless of where, or if, a body remains geographically/ economically/socially fixed, an individual’s “creativity and productivity define corporeal and ontological migrations” through the use of, most notably, new technologies. As capitalism in post-industrial countries develops to suit a 21st century information economy, or rather, better suits the developing economy for its own perpetuation, capitalists are content to export the factory into informational dead zones, so-called third-world countries where the expendable corpses of an invisible workforce are rarely accounted for.

Factory…conveys the idea of a vast automaton, composed of numerous mechanical and intellectual organs operating in concert and without interruption, towards one and the same aim, all these organs being subordinated to a motive force which moves itself.

Capital employs machinery, rather, only to the extent that it enables the worker to work a large part of his time for capital, to relate to a larger part of his time as time which does not belong to him, to work longer for another.

As we near the end of this inquiry, one critical component has been the filling-in of the relationship between the factory and the network, and to this end, Marx’s collected notebooks, published as the Grundrisse, are invaluable. Marx refers to machines as "fixed-capital" because of the requisite, non-circulating investment contained within the machine. It's also a helpful term for conceptualizing the scale of industrial machinery – it was quite literally "fixed" to the ground, immobile. Not so much today. 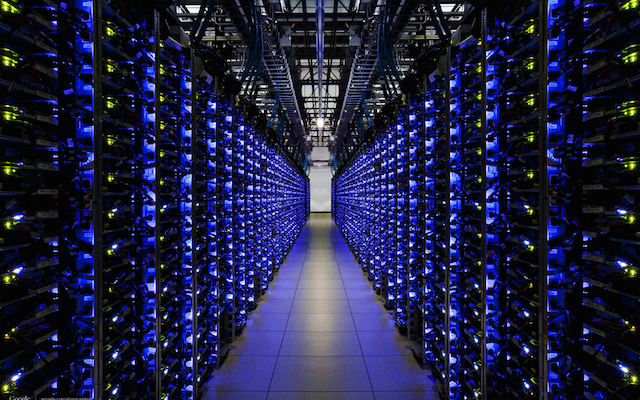 The machine is subordinate to capital in all its articulations and mechanisms. It stands opposite to labor. But so long as capitalism exists, labor will always undergo changes, always look different. For the Grundrisse Marx, the machine is the thing working, with all of the skill and strength that previously belonged to the worker, “with a soul of its own…[consuming coal] just as the worker consumes food.”  The production process is no longer dominated by actual labor, but subsumed under “the technological application of science.”

Science and technological development take a central position in Marx’s notebook musings, resulting in a more complete and sustained examination into science, technology, machinery, mental labor and collective work. As for their applicability today, these landscapes Marx charted are striking. Labor doesn’t so much take a back seat in the Grundrisse as it does relax a little bit - take a long lunch break...how about that bosu ball it's good for your back...watch your posture that's how you get carpal, you know; the emergence of science and technology as first parts of, then catalysts for, capitalism and the labor process eventually make labor easier, and therefore make it possible to labor more. The same “amount” of labor takes place, if not more, because of its newfound ease.

The proliferation of fixed capital represents the tendency of capitalism to effortlessly apply science (and technology) to production. The status of (manual) labor, already the most volatile and exploited facet of the production process, is reduced. Science (and scientific development) is a productive force in and of itself; it is unique because of its dual active character – productive and historical – that drives forward its own progress as well as the economic, social, and industrial spheres it impacts.

Production and the advancement of technology (so long as that technology relates back to the furthering of science) are pursued simultaneously. Marx: “This in no way means that this use value – machinery as such – is capital, or that its existence as machinery is identical with its existence as capital.” Machines retain an independent use value and a social character that may be destined for something more than production, in theory. The triumph of 21st century capitalism is that our personal computing machines of today produce nothing at all yet work without end.

This technological transformation is a shift from direct, individual labor to mediated, social labor, first represented and made possible by the factory, but perpetually striving to reach new height, because, lest we forget, the great value of labor (for everyone involved) lies within its social character. Machines produce value by their very existence (though they do need to be in use) and by further distorting the ratio of surplus labor to necessary labor. Still, unintentionally (how else?) machinery “reduces human labor, expenditure of energy, to a minimum.”

I lift a finger, strike a key, and in conjunction with billions upon billions of dollars worth of processing power and hundreds of millions of intelligent actors, both human and machine, scattered all across the world, I enact change, solve problems, and create value in an instant.

“Real wealth manifests itself, rather – and large industry reveals this – in the monstrous disproportion between the labor time applied, and its product, as well as in the qualitative imbalance between labor, reduced to a pure abstraction, and the power of the production process it superintends.”  In other words, for a 19th century scholar, the ease of both labor and the power with which labor commands in massive machinery provides some indication to actual wealth. "About 645,000,000 results (0.74 seconds)."

Machinery paves the way, says Marx, for the “free development of individualities [and] the general reduction of the necessary labor of society to a minimum, which then corresponds to the artistic, scientific etc. development of the individual in the time set free, and with the means created, for all of them.” Even the lowliest worker in the furthest-flung factory is impacted. It follows that in the most advanced capitalist societies this development is most stark, perhaps even to the point where there are some who work without ever working at all – diminishing “labor time in the necessary form so as to increase it in the superfluous form, [positing] the superfluous in growing measure as a condition for the necessary.” Time spent not working is just as important, if not more important, in determining true wealth and perfect capitalism. How then to monetize superfluous time and produce without work?

Machinery, technology, industry: “all organs of the human brain, created by the human hand; the power of knowledge, objectified.”  Prophetically – “the development of fixed capital indicates to what degree general social knowledge has become a direct force of production.” Dubbing it the "general intellect," Marx is referring to a total social character of knowledge and technological development, that is idealized in, shall we say, computer machinery;  "an articulation of fixed capital (machines) and living labor (the workers),” a co-operation of the two.

The computer network is proliferated, recreational, rhizomatic, and user-friendly. The general intellect can also be social life subordinate to general knowledge if and when the general intellect is exploited by capitalism. Surplus production and surplus population are necessary conditions of fixed capital and wealth. A fully developed and idealized capitalism requires a significant population of people that do not work at all, contributing to a general social knowledge that, in the informational economy, becomes the mode of production all on its own. [2]

That is achieved primarily through the creation of disposable time, and large quantities of it. Capitalism, thus, is “instrumental in creating means of social disposable time, in order to reduce labor time for the whole society to a diminishing minimum, and thus to free everyone’s time for their own development.” The problem is that, today, we cannot guarantee that our time is our own.

There is double-work to be done, because while capitalism works to create that disposable time, it must always convert it back into value. Free time is always subject to exploitation. When too much of that time is created, it cannot be undone. We grow accustomed to a standard of leisure. Capitalism must look to valorize free time itself, a time in which workers “themselves appropriate their own surplus labor.” Those in possession of the surplus (labor or capital) can then “employ people upon something not directly and immediately productive.” The economy of labor time is “equal to an increase of free time…which in turn reacts back upon the productive power of labor as itself the greatest productive power.”

Click here. Free time holds immense value, though it may not be directly accessible. Free time transforms the worker, no matter how it is spent. When free time exists as a combination of “both idle time and time for higher activity,” the subject returns to production changed, and changes the production process. When that higher activity and idle time both contribute productively to capitalism, all time is work time. What is it they say about too much of a good thing? “The employment of machinery itself historically presupposes superfluous hands;”  it is the task of contemporary capitalism to put those hands to work.

[1] "The workers activity, reduced to a mere abstraction of activity, is determined and regulated on all sides by the movement of the machinery, and not the opposite.” Grundrisse, 693.

[2] While Marx considered much, what was perhaps unforeseeable was a time when people were just never working, dictated either by choice, by force, or by the needs of capitalism. The crisis was to post-Fordist production and how to monetize information; the response was to make all activity productive. To make everyone work all the time, especially when you are not at work.