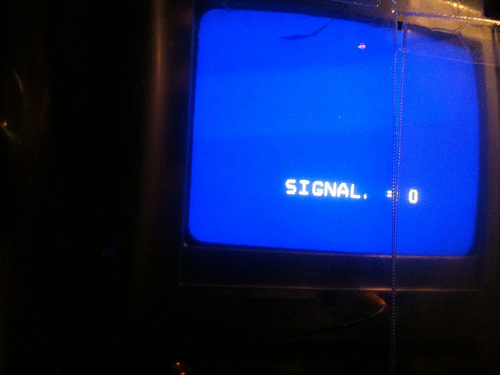 The signal is always identified in relation to what threatens to corrupt and distort it. - Tiziana Terranova

Three definitions emerge during Terranova’s early exploration into informational dynamics – “information is defined by the relation of signal to noise; information is a statistical measure of the uncertainty or entropy of a system; [and] information implies a nonlinear and nondeterministic relationship between the microscopic and the macroscopic levels of a physical system.” [5] These three definitions share a striking quality: the notion of uncertainty realized by and within information. This would stand in opposition to the more commonplace conception of information as always substantial and revealing; the more of it is had, the more is known. However, informational dynamics show that information itself has the potential to be both meaningful and empty. As a message travels through a particular channel, noise is produced as an after-effect and background distortion in conjunction with the signal. Information is always threatened by itself, from itself, with itself.

Information is infected by non-meaning, though not necessarily symptomatic. Information will not clue in what it cannot tell you, nor will it simply identify itself as without meaning. The dialectic of information thus posits two messages as one, inside and outside of one another, one “heavily loaded with meaning and the other [with] pure nonsense.” [6] These two messages, like two sides of a single sheet of paper, are essentially equivalent, or rather, virtually equivalent; they can be. Embedded within information is an unavoidable structural lack, a chasm of non-meaning actively constituting its absolute antithesis. With the signal and noise present in information, the privileged center of information at the center of the operation of late capitalism presents dangerous blind spot. It should come as no surprise, then, that obsessively, anxiously, stockpiling information, whether it is put to use or not, has become standard operating procedure of the state (to say nothing of the information capitalists – they’ve known this for some time). Snapchat arises as that which (can possibly) disappear, their half-hearted conceit of manufactured preciousness.