In that case, call it the steam-engine view of reality, people had noted that if I want to take the potential for motion implied in having a hot thing (and thus a concentration of kinetic energy relative to the surroundings) and turn that potential into directed motion, like takin’ these folks and their stuff from Atlanta to New York on this train by burning this coal and boiling some water...well I can’t ever get all of the potential contained in the random motions of the hot thing and convert that into directed, or useful motion. So entropy was conceived as the “wasted energy” that attends any macroscopic process. But the universe ain’t no steam engine, and conservation (the first law) tells us that nothing is ever really lost. Furthermore, we know now that entropic sinks are as necessary for the perpetuation of complex life as are energy-dense fuel sources. So Boltzmann’s work was the first step in the liberation of thermodynamics from a strictly engineering paradigm into a coherent theory of all dynamic processes. One day soon I’ll do a post just about Boltzmann...he holds a very special place in my heart. For now just note that our ability to define entropy in terms of available microstates is due to him.

In order to understand matter-randomization, it is helpful to momentarily ignore energetic considerations and only think about the number of microstates available as a result of redistributions in the material content of a system, i.e. chemical reactions. So now let’s start with an abstract example that simplifies the mathematics as much as possible (this example comes straight from Wicken’s book that I mentioned before). Imagine a container that contains only 8 gas molecules of two different types: A and B. Imagine as well that there are equal amounts of both, four molecules of A and four molecules of B, like so: 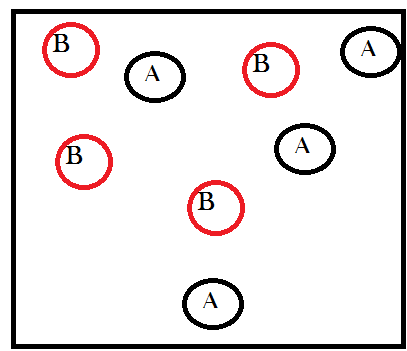 With me so far?