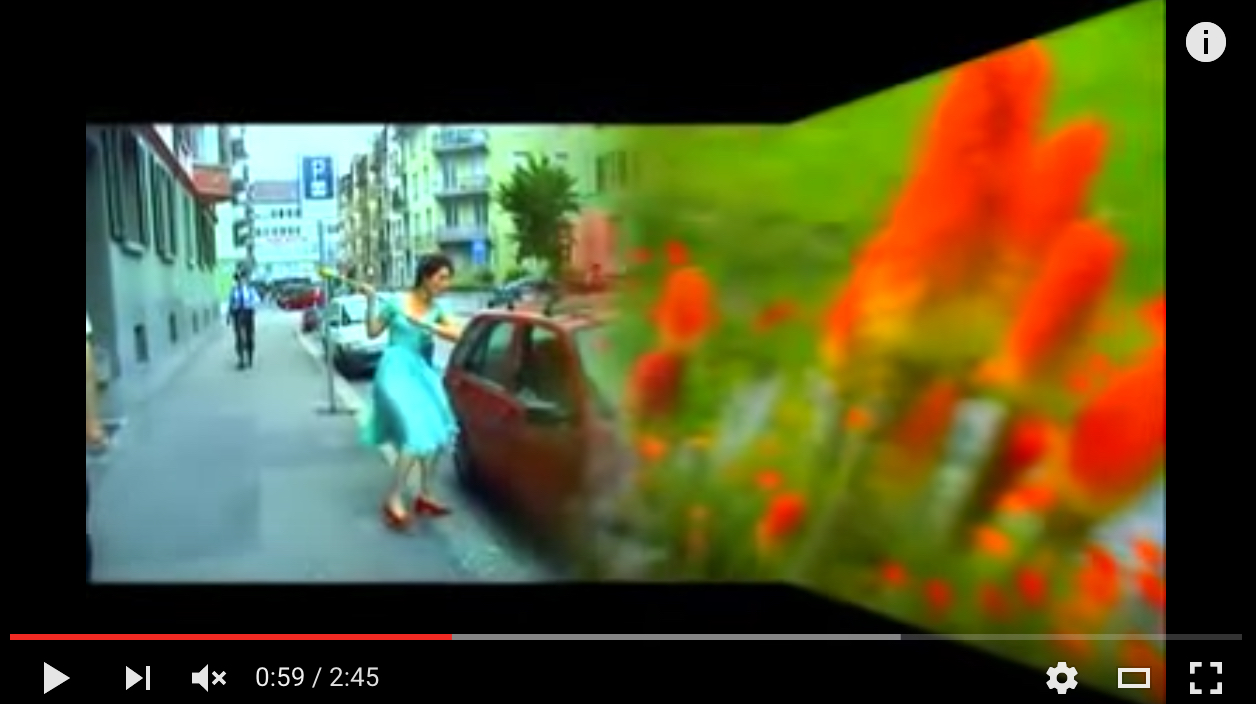 When a woman wants to get a project going she has to use methods that go against her nature. Women do not like to admit that they are using men's strategies because they're afraid that by doing so, they are no longer sexually attractive and they have to suppress their feelings. – Pippilotti Rist

In 1997 Swiss visual artist Pipilotti Rist created a video installation titled "Ever is All Over." The mesmerizing piece consists of two separate videos, projected onto walls, side-by-side. One features a close up of flowers, gently swaying in a pastoral field. The other shows Rist, walking in slow motion, blissfully, gracefully, swinging a long-stemmed flower. With a haunting melody playing in the background, she pauses to swing the stem graceful and violently shatters the windows of cars parked on a sleepy city street. The video won her a Premio 2000 award at the Venice Biennale in 1997.

It’s impossible to view Beyonce’s remarkable Hold Up video, from the recently released video album Lemonade, without seeing Rist’s work embedded in it. Several media outlets pointed out the similarities between Rist’s video and Beyonce’s equally powerful and evocative work.

Beyoncé has said more to a mass audience about the strength, creativity and power of women, particularly black women, in the United States, than possibly any other artist today. Her work is about being in charge of her art, body and representation. Since her fierce and catalytic display of the word “Feminist” on stage during her 2014 VMA performance, she has become an avatar for contemporary feminism and for the need to pay attention to the cultural and social lives and needs of black women. The imagery of her video, however, is not only about a woman who, possibly cheated on, is angry and wielding a big stick. There is note-worthy history, extensively and explicitly feminist that needs to be acknowledged.

Rist's video creates an image of a soft womanly world while wielding an unabashedly, violently, phallic weapon. It not just that the long-stem of the flower is phallic, but that the flower itself is specific: A Redhot Poker, which bears an uncanny resemblance to an erect penis. The final few minutes of the piece show a garden filled with entire Redhot Poker plants, swaying. At first they stand upright, then, through a turning of the camera, become limp and, deflated, turn downward.

The choice of cars, too, is relevant. Cars and flowers easily represent proxies for masculine and feminine, hard and soft, technology and nature. Writing in 2008, art critic Graham Coulter-Smith explained “Cars are machines in contrast to flowers which map onto nature to provide a rather stereotypical ideological association of women with nature and men with machines.”  The same can be said of the medium that Rist is using (video) and the use of the "high-tech" in installation work. Rist herself has spoken directly about the fact that video is a medium that requires measurement, specificity, mechanization, precision and technique, but she claims it as a way of expressing what appears to be alinear, murky, blended forms and ideas.

Early in the film, a woman police officer saunters slowly past her, smiles and nods approvingly.  Rist beams at the officer then destroys another glass window. The soundtrack is a soft drumbeat, punctuated periodically by the loud rumble of falling glass. It is a mixture of romance, destruction, urban fantasy, psychological inventiveness and artistic statement presented in what was, at the time, an exploding new medium.

The video’s whimsy and lushness, along with Rist's unabashed exuberance, are hypnotic.  Here was a powerful feminine woman, casually using a male symbol to destroy artifacts of men’s mastery over nature. It was a witty, even flirtatious, commentary on gender, state and socially sanctioned violence. Three generations —a man, a child, and an old woman— walk by and around her, without intervening, as she moves from car to car.  The police officer, very notably a woman, too, not only allows her to wreak this violence but also happily salutes her brutal destruction of her environment. It is a striking artistic and feminist statement about masculine institutional power.

Rist leaves no detail untouched. In bright red shoes and pretty dangly earrings, she wears a flowing, feminine blue dress that softly and slowly wraps itself around her legs.  She is, in point of fact, dressed like Dorothy in the Wizard of Oz, and her shoes similarly evoke Hans Christian Anderson’s Little Red Shoes – both stories of girls who imagine themselves outside of the confines of their prescribed roles, one more successfully than the other.  Art critics, debate the references.

For decades, Rist’s work has been gently but persistently forcing audiences to consider, often through enticing and seductive pictures, “nature” and the “nature” of violence, beauty, masculinity, femininity, exploitation, collusion and power. Her work is literally covered in flowers, trees, grass and organic forms presented at scales meant to deliberately blur the lines between self and “other” – organic or man made.  She’s turned panties, which she calls “temples to the abdomen,” into chandeliers, made people look at women’s insides, literally immersing them in women’s bodies. In one performance, she does a Minnie-Mouse dance while she repeatedly sings, at faster and faster rate, “I'm not a girl who misses much.” It's a line from the Beatles, “Happiness Is a Warm Gun.”  When she talks about Pour Your Body Out (7354 Cubic Meters), another piece, she’s explained, “One of my biggest thoughts is to reconcile thinking and body,” a particular problem for women, central to feminism. “Politically,” she has said, “I am a feminist, but personally, I am not. For me, the image of a woman in my art does not stand just for women: she stands for all humans.”

Rist is an artist whose work has presaged many current feminist concerns and public confrontations. Take the current end period shame movement. While many people might think of the drive to normalize periods and destigmatize women’s bodies and their functions in terms of individual women’s needs and comfort, it is, in fact, an explicitly political feminist movement, one which seeks more broadly to decenter men’s bodies in our collective understanding of what it means to be human. This has huge societal implications and is a political act.

In Rist's 2009 "Pour Your Body Out", a site-specific installation at the Modern Museum of Art in New York, she climbs out of a pool of water, wearing white underwear from which period blood drips, deep red and disarmingly, given widespread disgust at the thought, until the water becomes a crimson tide. The color saturated the space. The New York Times described it as creating “a womblike comfort zone” before noting, “You don’t need to be a feminist critic to understand the significance of a female artist unleashing a red torrent on MoMA’s immaculate white walls.”  The text that accompanied the video installation read, “Practice stretching: pour your body out of your hips or watch through your legs. Rolling around and singing is also allowed!” Pretty good for a woman whose name is a childhood endearment taken from the Astrid Lindgren’s feminist heroine, Pippi Longstocking.

Rist has been defining video art and the uses of technology in installation for decades. She has, very consciously, embraced both the pop culture label often ascribed to her work and talked about her art as explicitly addressing social change. Her hypnotic and sensual visions bathe viewers in saturated colours, immersive sounds and visions of nature that go far beyond sexual suggestiveness, touching on technology, mechanization, institutionalization, gender and the limitations it imposes.

As a Beyoncé fan who is electrified by her outspoken feminist statements, it is frustrating to see this opportunity lost, even if it is a tribute to the artist.  Overt acknowledgement of Rist’s influence may have simply fallen victim to the casual erasure of women’s work that happens every day in media, however.  The multi–layered Lemonade is so rich with allusions that it is hard to keep track of them and endlessly delightful to discover them (for example, in the #LemonadeSyllabus compiled by Candice Benbow).  It may be that a producer simply liked Rist’s compelling vision, saw it once and filed it away. Not many people are active followers of women artists, as a matter of fact, chances are fairly good that most art-goers can’t even name a woman artist if asked. For someone who saw it, but was not focused on the larger issues, such as a lack of recognition for women’s art and the broader cultural erasure of women’s work, that would be par for the course.

From this perspective, it is particularly problematic that the majority of writers and producers on Lemonade are men, for whom feminism and women’s power and success, beyond Beyoncé’s, may not actually be a core, commercial, concern.  Only 10% of writers of credited on the album are women and women make up only 11% of producers, including Beyoncé herself.  It’s a little ironic considering that video as a medium has provided women artists with unparalleled freedom from the traditional woman-denying male-dominated canon.

Note: There is no official Rist Video, but here is one on YouTube that has more than 200K views.