We are bored when we don't know what we are waiting for.

Adrian Chen called it “the gif to end all gifs.” Musing on its place among other reaction .gifs, he wondered whether "the internet may disappear completely, thanks to the power of this one compelling gif." Chen hints at the potential existential crises it could provoke as well, speculating that anyone on the receiving end “will probably disable all of their social media accounts and move to a remote mountaintop." Consisting of the phrase, “lol nothing matters”, in a greenish-blue lowercase 3-dimensional font, it "represents an appropriate reaction to 99% of things one sees on the internet."

Listlessly circling itself in digital space, it is angled at what looks to be forty or forty-five degrees (tilting upwards from left to right) and takes about 2.35 seconds to complete one revolution. The 90s aesthetic recalls the old Windows NT 3-dimensional text screen saver.  Since advances in technology have made screen savers obsolete, this .gif is pure ornament. Nostalgic and ruinous, this seemingly insignificant object displays “the twin poles of post-modernism" — the apocalyptic and the retro. [2] The apocalyptic "power" that Chen was hinting at parallels what Benjamin characterized as "the revolutionary energies that appear in the 'outmoded.'" [3] By collecting capitalism's detritus, discarded objects can enter the now, escaping the curse of utility and entering the horizon of "completeness." [4]

When I first viewed it, I clicked on a link that took me to the full-sized version – essentially a white screen entirely devoted to this .gif. You can view it in that way here. The screen being empty of all content save the animated text, a vast emptiness of white space appeared, giving me the experience of a entering a clearing, or opening, into which I was left alone. This radical differentiation was a kind of void in which I was removed from the signifiers of my daily internet life. The .gif spinning in the desert I had entered reminded me of all those liminal, transitory places – waiting rooms, airports, hotel lobbies. Siegfried Kracauer said that in the hotel lobby “people find themselves vis-à-vis de rien.” [5] That’s the kind of feeling I had. In the lobby, you can walk in, blend into the crowd. You might not be able to make it up the elevator, but you can stay on the ground floor as long as you like. You might be bored, or just waiting. No communion between the warm bodies passing through, just that ersatz togetherness, a barren relation through nothingness.

There really wasn’t anything for me to wait for, yet still I waited. At the same time, I was also hoping. In that sense it was a kind of messianic moment. I was waiting, hoping, for the reason for my being there to be revealed. With each passing revolution, I was waiting in expectant anticipation– for the .gif to complete a revolution, for something to “happen” – but nothing happened. 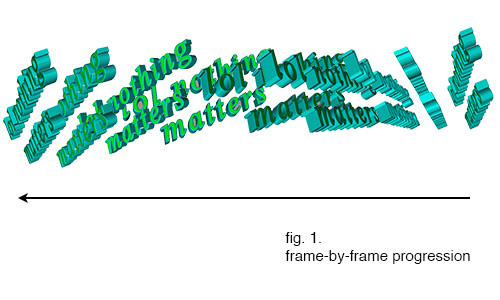 I kept looking what appeared to be a simple and logical animation, its concept based on mimicking the physics of a real spinning object. But there are some counterintuitive moments in the movement of the file, moments in which the story of the .gif’s creation reveals itself. Most noticably, it rotates towards the viewer, from right to left, opposite the direction in which it is read. This creates a kind of tension between the movement of the animation and the viewer's focal points. Imparting a meaningless sense of urgency, it challenges you to read quickly against the current of its motion, before it spins away.

I eventually realized something less apparent, which is that the behavior of the animation itself is a visual illusion. This is evident when the rotation comes around from the left to the right, and the image is about to turn the corner and continue its revolution. You expect to see the reverse side, but at the moment it turns its back, a brief but perceptible cut flips it back around, so the viewer never does see the reverse side. To see what was really going on, I downloaded the file so I could look at all the frames. When the image is about to turn the corner, it actually just starts over. This creates the appearance of a complete revolution, even though what the viewer is really seeing is more of an oscillation along a semi-circle.

The animation is similar to the barberpole effect. Stare at one long enough and you'll notice something amiss. The secret is that although the pole is rotating horizontally, in a circle, it appears that the red and white stripes are moving vertically. Similarly, the animated text .gif employs this rather simple dissimulation to hide the truth of its actual movement, which is based more on repetition than fullness of motion.

If the .gif were behaving logically, as a "real" object in space, then the text-image would have continued rotating, fully embracing its non-existent real life analogue. Refusing to turn its back, the .gif transforms the apparent simplicity of its premise in a kind of digital conjuring. In these moments, this object tells the story of its own existence. There is a beauty to this object, to the extent that it is purposive without purpose. Final without end, these two moments of “made-ness” articulate its non-conceptuality. It narrates its own being, as digital, as idle, as illusion. Betraying rationality and laws of physics, the .gif does not behave as it “should.” Like some bizarre planet, orbiting itself, this .gif mobilizes its own concept.

Refusing to mimic an analogue in the real world of gravity, the .gif undermines expectations. As Derrida has noted, metaphors from the analog sphere heirarchically structure the experience of the digital. He sought to challenge that order by giving writing a “voice,” for example in the way that “the word ‘TAIN’ overprints its visibility onto écriT, écrAn, écrIN.” In this way, the written word “can also be heard, not just seen.” [6] This .gif accomplishes a similar objective in a different way. The viewer applying rational expectations about how “real” objects rotate to the object on the screen will only have those expectations undermined. In that moment of observation, the viewer is confronted with a challenge to basic understandings of spatial reasoning and the viewer's own perception. This gives image a curious resonance; it makes itself heard in that way.

Many of the metaphors relied on by a computer operating system are bureaucratic in nature. Let’s not talk about,” Derrida says, “the verbs cut and paste or delete that my software also includes.” [7] Derrida believes that  “the order of the page, even as a bare survival, will prolong the afterlife of paper—far beyond its disappearance or withdrawal.” [8] Insofar as they resist bureaucratic metaphors, .gifs are considered to be the apotheosis of meaninglessness internet behavior. They are idle, refusing to work. They even resist the essence of bureaucratic functioning: filing. They have no names, only “tags,” and therefore resist traditional forms of archiving. This quality beckons the domain of namelessness, contributing to their mystery.

And so I’ve attempted to name a certain .gif. At the least, this .gif could be the end of some internet arguments, if not the end of the internet. Whether it ends a conversation or the world, it is interesting the manner in which this .gif specifically, and, perhaps .gifs in general, participate in a kind of historical closure. Clive Thompson talks about the similarities between Eadweard Muybridge’s 1879 zoopraxiscope loop of a running horse and today’s .gif. Both serve similar functions, he argues, because “the animated GIF lets us stop and ponder a single moment in the stream, to resee something that would otherwise zip by unnoticed.” In some ways, that’s true – for some .gifs. But this one does something new. Derrida remarks that “by carrying us beyond paper, the adventures of technology grant us a sort of future anterior.” [9] The temporal slippage is freeing. These technological changes and advances “liberate our reading for a retrospective exploration of the past resources of paper, for its previously multimedia vectors.” [10] And so what I like about this .gif is the fact that it opens a new space, playfully subverting the viewer in an almost interactive way. It evokes both nostalgia and nothingness, carrying us beyond bureaucratic metaphors and towards an uncertain future.