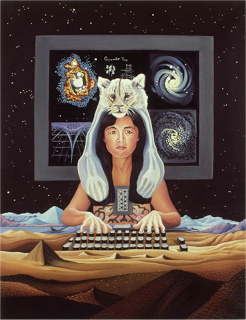 Feminism is not just a theoretical approach to epistemology, but a guide for action to address the nature of gender-based modes of inequality and the subordination of women. Throughout the 1990s, the potential of the Internet and digital technologies to fundamentally reconfigure and reconstruct gendered relationships was a significant part of an emergent mode of {cyber}feminist thinking. Speaking to the potential of {cyber}feminism as a distinct mode of feminism Faith Wilding argued: “cyberfeminists have the chance to create new formulations of feminist theory and practices that address the complex new social, cultural, and economic conditions created by global technologies.”

Nonetheless the potential of the Internet, as a past proposition or future projection, is still very much up for grabs. Online, women are still subjected to many of the inequalities that exist ‘in real life’. In fact the Internet may not ‘leveled the field’ but in many ways intensified, accelerated, and extended material embodied inequalities into a so-called immaterial disembodied Internet. According to Kennedy, Wellman and Klement: “People’s social characteristics are not disposable baggage to be checked at the security counter when they go online.”

In a more optimistic reading, discussing this current ‘mold’ and the potential for change, Nina Power argues: “the speeded-up time of internet life also creates an impatience with the world as it is: now it is possible to organize, on or offline, modes of opposition that take up almost immediate umbrage with the world as it currently is. The possibilities for consciousness-raising, but also action, are now extended in almost every direction.”

Looking outwards, what are the boundaries of gendered inclusion and exclusion in digital spaces? Looking inwards, who are the ‘we’ of cyberfeminism? Who participates? How should they participate?