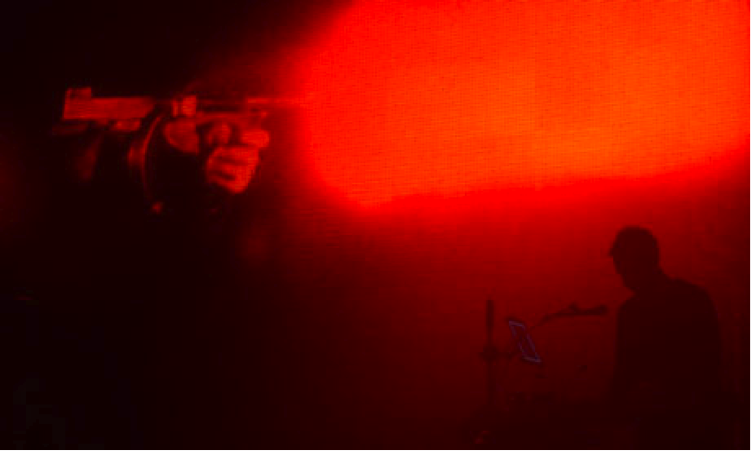 What is Massive Attack v Adam Curtis exactly? Is it a live show? Is it a movie? Is it theater? Is it a performance art piece? It's all of those things but not in any way you can easily put your finger on. For starters, the title is a bit misleading, and wrongly evokes assumptions of a Massive Attack live set with Curtis directed video projections.

It’s so much more than that.

In fact, it is the most vital work of art, performance, music and film to be seen this year. It’s an experiential audio-visual assault meant to penetrate the deepest corners of your rational mind. It is a work of strange and singular genius that invites you to think deeply about history, power, progress and our part in shaping the future.

Held at the Park Avenue Armory, a massive performance space in Manhattan, Massive Attack v Adam Curtis combines surround vision with live music cues, punctuated by text and dizzying displays of light. 11 towering screens envelope the audience by displaying Curtis’ trademark montage guided by his own narration. Meanwhile, Massive Attack handle the live sound from behind the screens, playing musical cues from “The Twist” to “Karmacoma”, and songs by Jesus and Mary Chain and Leadbelly. In this way it’s more movie-like than live gig, an IMAX-esque culture jam instead of a gallery show or a performance.

The overall point of the piece (though to call it that is slightly reductive) is to argue that humans have been forced into inactive roles in every day life. This is largely a result of omniscient power and predictive data. To simplifty, mathematical information derived from tragedies, and victories from the past. This data has in turn, stifled us as a species, into a kind of zombified, fearful state of being mediated by distractions as widespread as Prozac and the birth of CNN and the 24-hour news cycle. Massive Attack v Adam Curtis attempts to find the source of this current moment of cultural paralysis through keen historical observations, and by drawing parallels to what at first appear to be disparate narratives, linked through montage. Song and image interweave, sometimes transitioning abruptly from one tone to another. Intertitles flash the phrases EVERYTHING IS GOING ACCORDING TO PLAN and IF YOU LIKE THIS, YOU WILL LOVE THIS. Each edit, either of footage, text or music, drips with meaning and significance with relation to one another: at one moment, wry and cynical, another moment of carefree reckless abandon and another, of menacing dread. A young Russian girl plays with a live pistol that we learn she’s going to sell in order to buy fast food. You might want to dance along to a familiar pop song cue, but you can’t when you’re pushed to this kind of awareness of our own cultural subservience and numbed historical passivity.

Donald and Ivana Trump, Nicolai and Elena Ceausescu, Jane Fonda, Ted Turner, Hamid Karzai, the heads of Goldman Sachs, the first responders at the Chernobyl diaster, the tragic death of British pop star Pauline Boty and Siberian punk rockers, are all brought into focus during the 90 minute piece. These may seem like broad brushstrokes but Curtis and collaborators manage to effectively pair every ideological point with historical/visual evidence, making our own global history infuriating, compelling, relatable, and human, rather than simply spectacle.

Massive Attack v Adam Curtis’ theses guide you to think deeply and critically about the action and reaction of everything… Our own stagnancy, our own lack of heroism, and the debilitating fear and fatigue we’ve been dumbed into feeling. You will learn, you will feel, you will be affected. The piece and its makers though aren’t satisfied with having it be an exercise in clever historicization, or distanced intellectual reflection (without spoiling anything, the piece’s concluding moments are very clear about pointing out that you have the power to make change). This isn’t art for sake of art. It’s a call to action, and Curtis and Massive Attack provide you with not just information but a space for you to engage with history and your own part in it. In this way it is a work to not only be celebrated but its messages to be disseminated throughout mass culture, to be used as the catalyst so that we may use the past to mold our futures, rather than stay static and paralyzed by the casualties of history and the invasiveness of the powers that be.